When you walk into the Japanese Garden you step through a traditional Japanese gate or Torii (鳥居). In the Japanese tradition the Torii stands at the entrance of a Shinto shrine or jinja (神社). In Japan when you enter a shinto shrine you will often see multiple torii gates after each other. Because of this the torii are also known as the roads of the Gods. As such it symbolizes the transition from the normal to the holy. 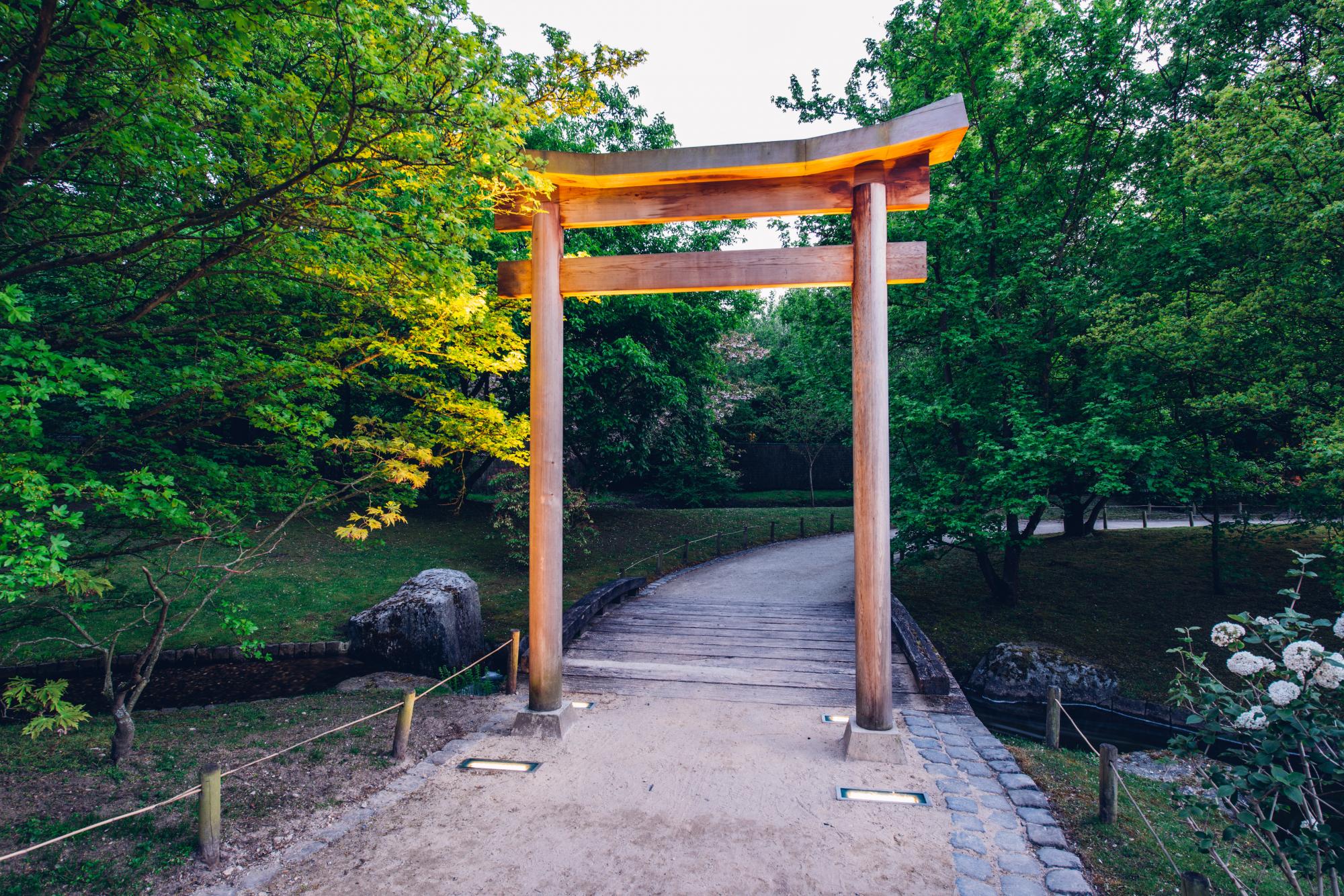 The peacebell was inaugurated in October 2016 in celebration of the 150 years of diplomatic relations between Belgium and Japan.

The bell is also a memorial for the victims that died during the destruction of Hiroshima and Nagasaki in 1945. It is a symbol of peace and a rejection of war in solving disputes between states. That why, in the name of peace, please ring the bell as loud as you can! 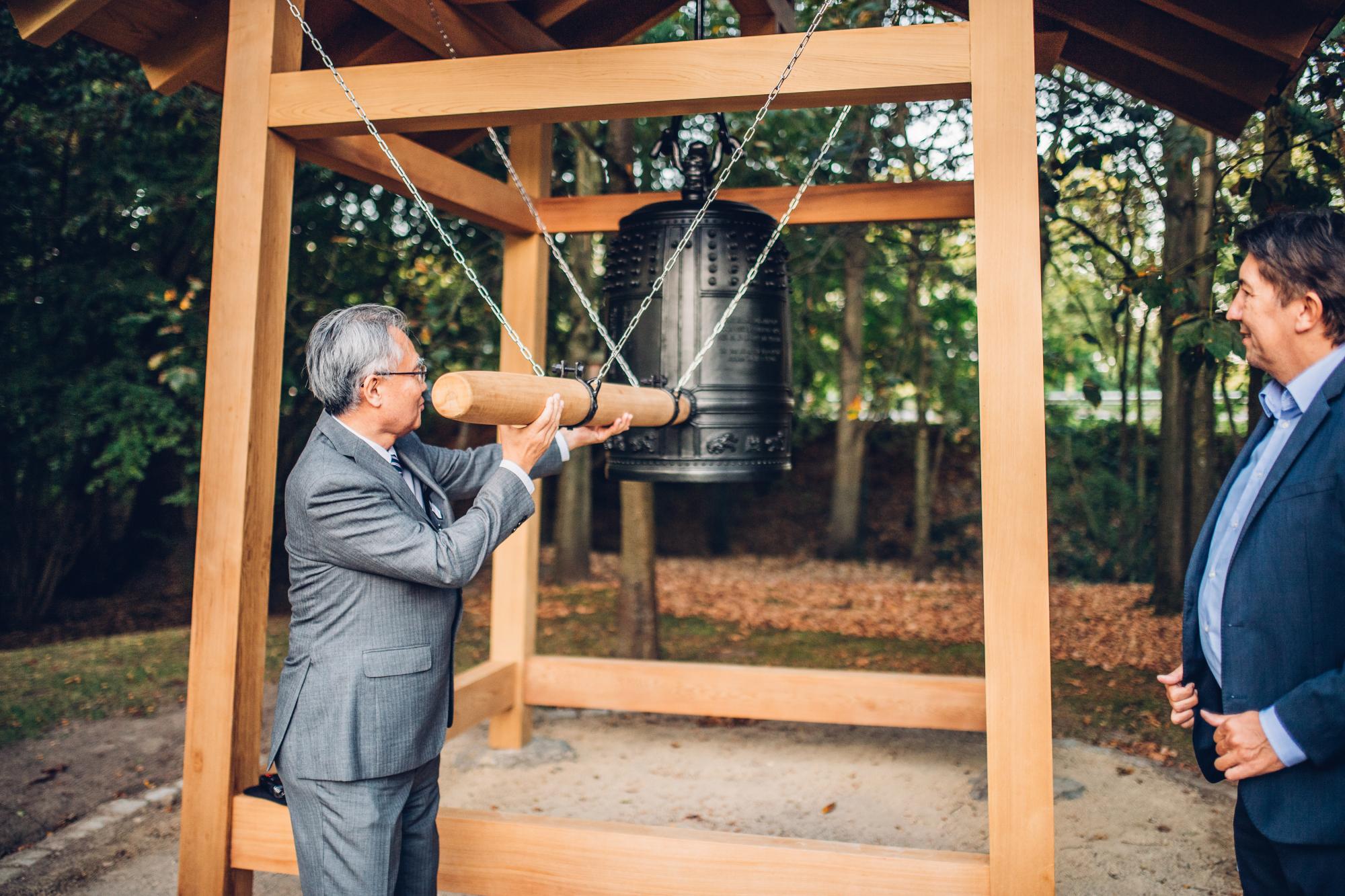 Opposite the Peacebell you will find the Shinto-shrine or jinja (神社). The one in the Japanese Garden is a smaller shrine that you will often find throughout Japan next to roads. According to the traditional Japanese faith, a God or Kami (神) lives in the jinja. When visiting or seeing one, Japanese people take a moment to stop, donate a little bit of money, bow, clap two times, and give thanks to the Gods or make a wish. In Japan the shinto shrines for important Gods are very large and are often combined with Buddhist temples.

At the Japanese Garden in Hasselt, the collected money is donated to charity. 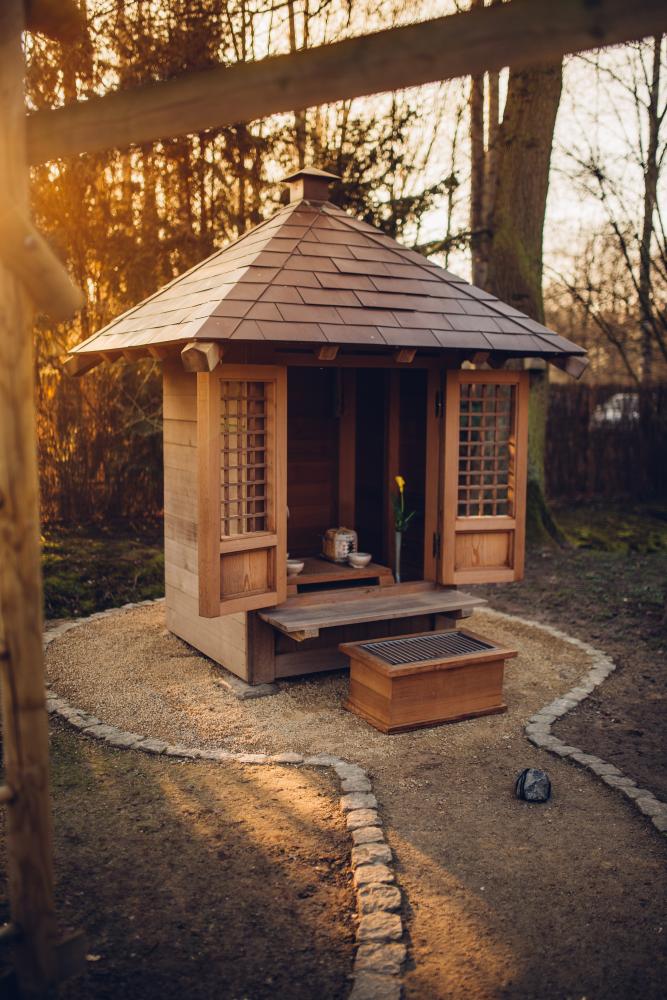 The tea house Jyushoan (寿松庵) stands atop one of the artificial hills of the Japanese Garden. The artificial hills represent the mountains of Japan. In the Zenbuddhist tradtion both the tea ceremony and the architecture of the tea houses are very important. Traditionally the tea room was a part of the Japanese home (kakoi), later they were built as a separate structure (söan) in the surrounding nature, names 'sukiya' which literally means 'the home of good taste'.

The tea house in the Japanese Garden recalls the atmosphere of a living room in a 17th century isolated, old  Japanese farmestate: it is simple, sober and quite dark. The interior of the tea house was chosen for its minimalism so that people can concentrate on the tea and not be distracted. The walls are very thin as to create the illusion that you are sitting in the middle of nature where you can hear the chirping of the birds and the rustling of the leaves as the wind makes them dance. The entrance door is low and narrow and symbolizes the strict difference between the worldly surroundings and the holiness of the inside.

Next to the tea house you can find a tsukubai (蹲踞), a stone wash bowl where the participants of a tea ceremony symbolically can wash their body and soul.

Next to it you can find an Oribe stone lantern (織部焼). The name Oribe references Furuta Oribe, a medieval grand master in the tea ceremony. The stone lantern is a memorial to him. 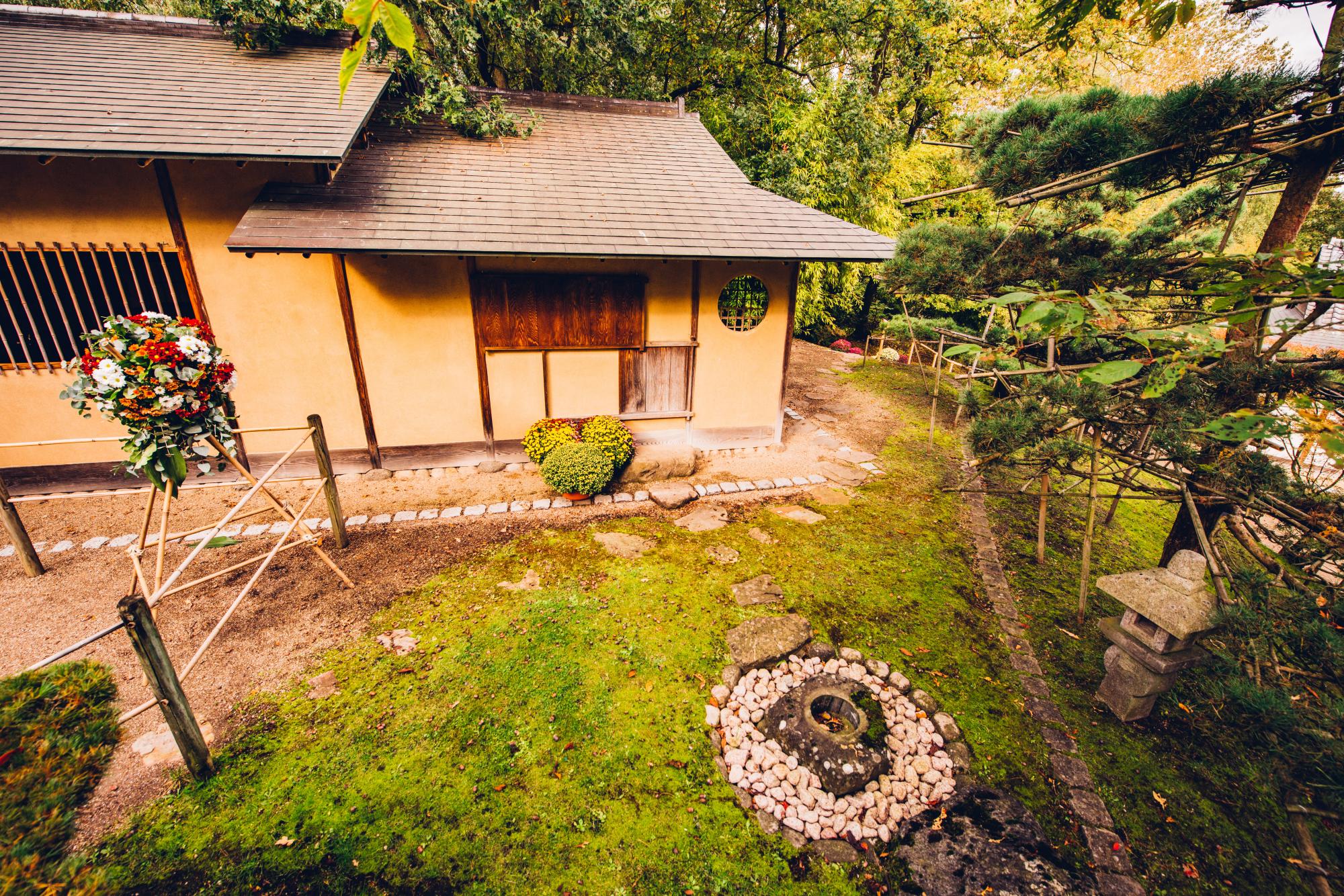 Ema (絵馬) are small placards that are used in Japan during Shinto and Buddhist rituals to write down a wish. In the past Ema were primarily used by Japanese farmers to wish for rain during draught. Now the Ema are used during special events to communicate their wishes to the Gods. De Ema are hung close to Shinto shrines, where the shinto Gods or Kami stay so that they can always come out and read them. After the wishes have been written down they are burned during a ritual so that the wishes are freed and can reach the heavens where the Gods live.

In the Japanese Garden the wishes from the visitors are gathered during Tanabata or the wishfestival in the beginning of summer and a burned during Obon Matsuri. 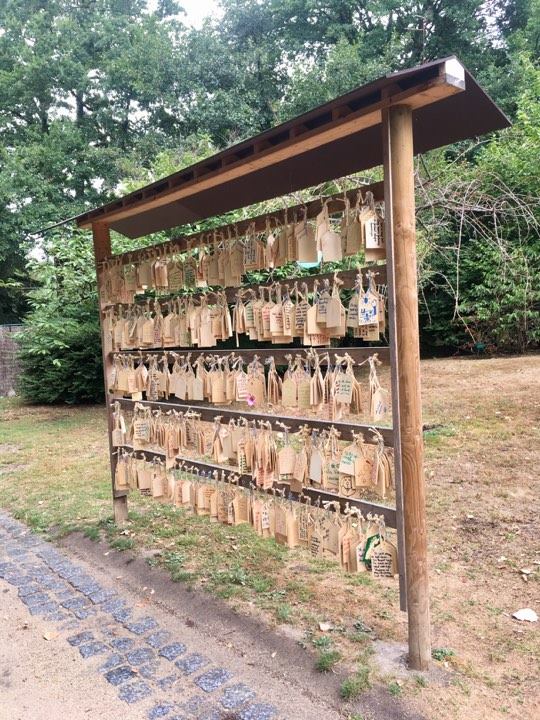 At the exit of the Garden you will find the Azumaya (東屋). This is a typical summer pavilion. It will protect you from the hot sun and cold rain and it was built according to the Japanese rules. The Azumaya can't have any walls (so that wind can blow through it), has to ba assymetrical (because only important buildings can be symmetrical) and it can't rest on four pillars (because only animals walk on four legs).